The Journal of the American Philosophical Association, forthcoming (with M. Godman and D. Papineau)

This paper aims to build a bridge between two areas of philosophical research, the structure of kinds and metaphysical modality. Our central thesis is that kinds typically involve super-explanatory properties, and that these properties lie behind all substantial cases of metaphysical necessity.

The fourteen papers in this collection offer a variety of original contributions to the epistemology of modality. In seeking to explain our knowledge of possibility and necessity, they raise some novel questions, develop some unfamiliar theoretical perspectives, and make some intriguing proposals. Collectively, they advance our understanding of the field. In Part I of this Introduction, I give some general background about the contemporary literature in the area, by sketching a timeline of the main tendencies of the past twenty-five years or so, up to the present debates. Next, I focus on four features that largely characterize the latest literature, and the papers in the present collection in particular: (i) an endorsement of the importance of essentialism; (ii) a shift to a “metaphysics-first” approach to modal epistemology; (iii) a focus on metaphysical modality as opposed to other kinds of modality; and (iv) a preference for non-uniform modal epistemology. In Part II, I present the individual papers in the volume. These are organized around the following four chapters, based on their topic: (A) Skepticism & Deflationism; (B) Essentialism; (C) Non-Essentialist Accounts; (D) Applications.

The volume is dedicated to the memory of Bob Hale.

I propose that we approach the epistemology of modality by putting modal metaphysics first and, specifically, by investigating the metaphysics of essence. Following a prominent Neo-Aristotelian view, I hold that metaphysical necessity depends on the nature of things, namely their essences. I further clarify that essences are core properties having distinctive superexplanatory powers. In the case of natural kinds, which is my focus in the paper, superexplanatoriness is due to the fact that the essence of a kind is what causes all the many properties and behaviors that are typically shared by all the instances of the kind. Accordingly, we know what is necessarily true of kinds by knowing what is essential to them in the sense of actually playing such causal-explanatory roles. Modal reasoning aimed at discovering metaphysical necessity thus proceeds via essentialist deduction: we move from essentialist truths to reach necessary truths.

The paper explores the project of an ambitious modal epistemology that attempts to combine the a priori methods of Chalmers’ 2D semantics with Kripke’s modal metaphysics. I argue that such a project is not viable. The ambitious modal epistemology involves an inconsistent triad composed of (1) Modal Monism, (2) Two-Dimensionalism, and what I call (3) “Metaphysical Kripkeanism”. I present the three theses and show how only two of those can be true at a time. There is a fundamental incompatibility between Chalmers’ Modal Rationalism and Kripke’s modal metaphysics. Specifically, Chalmers’ conceivability entails possibilities that a Kripkean rejects as genuinely metaphysical. However, three positive stances in modal epistemology emerge from the combinations that the triad allows. One of those offers a promising way forward for 2D modal epistemologies. But it comes with a cost, as it requires abandoning modal monism and reshaping the scope of what a priori conceivability can give us access to.

(with A. Vaidya and M. Wallner, under review)

(for Epistemic Uses of Imagination, A. Kind and C. Badura (eds.), Routledge forthcoming)

In this paper, I aim to rescue the a priori/a posteriori distinction from Timothy Williamson’s recent attack (2007; 2013). Williamson argues that the distinction, however well-established, has no real epistemological significance and should be dismissed. Williamson’s argument rests on the thesis that in both the (supposedly) a priori and a posteriori cases, we gain the relevant knowledge through similar cognitive processes. Specifically, our imagination plays a central epistemic role in both kinds of cases. Indeed, Williamson trusts our imaginative procedures to yield both “quotidian” knowledge and metaphysical modal knowledge in a variety of cases (2016). I reject Williamson’s challenge to the a priori/a posteriori distinction by arguing that, in the relevant cases, imagination does not play any epistemically significant or evidential role for the resulting knowledge. Upon examination, those are instead cases of either empirical or a priori inference. While we can individuate key premises supporting the resulting knowledge, imaginative processes do not play any comparable explanatory role. Their contribution looks rather fortuitous and dispensable. I extend my point, mutatis mutandis, to knowledge of metaphysical modality, where the key premises are in this case essentialist truths. While imagination may play a supportive role for modal reasoning and belief-formation, it is knowledge of essence that properly constrains and explains the resulting modal knowledge. Imagination is thus best understood in terms of cognitive-epistemic reasoning tools or heuristics, with no evidential weight. I conclude that while Williamson’s challenge to the a priori/a posteriori distinction does not succeed, we should carefully re-assess the supposed epistemic powers of imagination.

(In preparation for The Epistemology of Modality and Philosophical Methodology, A. Vaidya & D. Prelevic (eds.), Routledge forthcoming)

I defend a picture of the epistemology of modality considered as a whole or of its architecture. According to this picture, the epistemology of modality is non-uniform, namely we need multiple epistemic means and methods for modal knowledge. Depending on the cases, we might need, for example, essentialist deduction, or conceivability, or counterfactual reasoning, in order to gain modal knowledge. Epistemic non-uniformity holds that there is no single canonical route for accessing modal truth. This thesis has significant advantages for recent empiricist theories of modal knowledge, in that it helps them deal with the problematic category of a priori necessities. Furthermore, epistemic non-uniformity is supported by a corresponding view of modal metaphysics. According to modal pluralism, modal space is fragmented. Logical modality, nomological modality, metaphysical modality, and so on, all individuate distinct sub-fields, based on different sources of necessity. Thereby, depending on the kind of modal truth we are looking at, different epistemic means and methods may be required to gain modal knowledge in a given sub-field. We thus learn that the epistemology of modality is non-uniform by appreciating the varieties of necessity. More generally, it seems a profitable methodology to approach the epistemology of modality by first looking at the metaphysics. As I argued elsewhere (2018a), in order to elucidate modal knowledge, we should first clarify the underlying metaphysics or the nature of modal truth.

I discuss several problems for Williamson’s counterfactual-theory of modal knowledge and argue that they have a common source, in that the theory neglects to elucidate the proper constraints on modal reasoning. Williamson puts forward an empirical hypothesis that rests on the role of counterfactual reasoning for modal knowledge. But he overlooks central questions of normative modal epistemology. In order for counterfactual reasoning to yield correct beliefs about modality, it needs to be suitably constrained. I argue that what is needed is, specifically, information concerning the nature or essence of things. By integrating this information, essentialist deduction arguably provides a better account of our knowledge of modality. Furthermore, I argue that essences have distinctive causal and explanatory powers—indeed, essences are superexplanatory for how things are. Compared to Williamson’s counterfactual-theory, superexplanatory essentialism clarifies what the proper constraints on modal reasoning are, and why they have such a special status.

Here is how I see the space of metaphysical necessity: 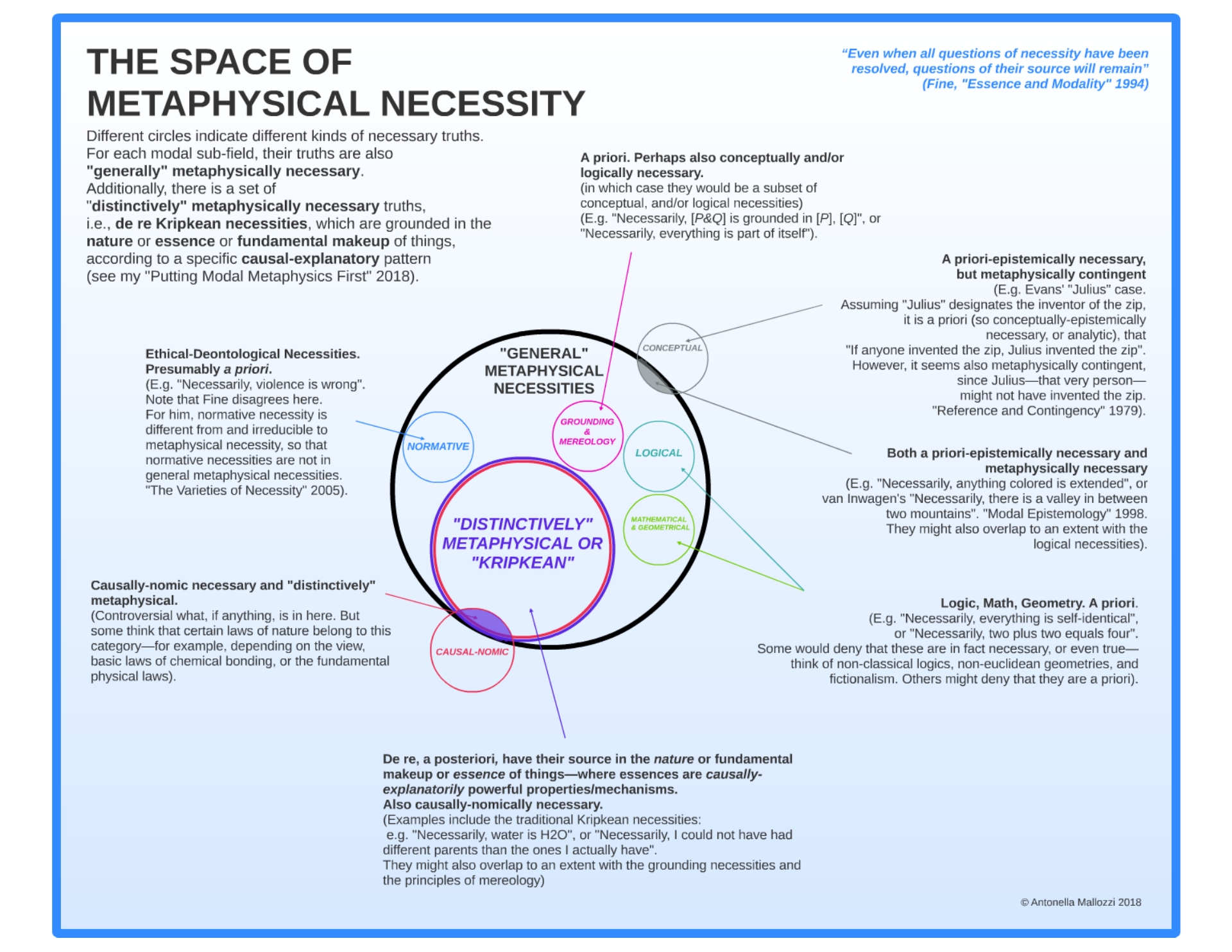